From the first mention of Donald Trump as a possible candidate for the presidency of the United States, I have wondered how my father would have reacted to the news that his fellow Wharton School alumnus harbored such ambitions. Charles Alfred Keyser, Class of 1931, died in 1970 in Montclair, New Jersey at age 60, still to my knowledge intensely proud of his connection to the prestigious University of Pennsylvania Wharton School of Business. That and his Delta Tau Delta fraternity chapter there. My siblings and I used to grumble about the long hot rides in a car with no air conditioning before the Garden State Parkway and other toll roads existed  because the dentist or doctor or someone else was an old school friend from Penn. Of course, as a Northwestern Mutual life insurance agent, there probably was a business benefit to maintaining those old contacts. As kids, we didn’t see that.

My father taught me all the words to the song disparaging Penn’s rival university, Cornell: “Far above Cayuga’s waters there’s an awful smell . . .”  It was probably good that I chose a different midwestern university’s school of journalism to attend when the time came.

Charles Keyser, nicknamed Whitey by his boyhood friends in Nebraska in reference to his very blond hair, was born in Lincoln, the son of a horticulture professor and a conservatory-trained pianist. The marriage ended in divorce, with Charles and his mother moving to the town of Wayne, where she offered piano lessons in her home. My father spent his first two years of college at the local state teachers college before transferring to Penn. When I suggested a similar approach as a money-saving move for myself, he said, “No, it’s much better to spend the entire four years at the same place.”

After graduating, my father moved to New York City and found work at a large company, with which he shortly became dissatisfied, planning to leave as soon as he was able. (When I saw the film, “The Apartment,” the scene of actor Jack Lemmon’s workplace – row upon row of identical desks occupied by identical men all identically dressed and robot-like pushing identical-looking papers – it reminded me of my father’s description of the place. For all my life I heard from an uncle on my mother’s side of the family about how my father quit a perfectly good job during the Depression.)

I don’t know how my parents met. I picture them as young people do, making the best of a bad economic condition, sharing cheap wine and food with equally strapped friends. My mother had returned from a wonderful year in France where she’d  attended the Paris branch of the New York School of Fine & Applied Art (Parsons). Back in New York, she found work as a fashion illustrator with the designer Muriel King. Following a wedding in the backyard of her parents’ home in Orange, New Jersey, the newlyweds moved to a rented apartment in Jackson Heights, Queens. I came along eventually and lived there with them until the aforementioned perfectly good job did not lead to another, and the three of us were forced to move to the third floor of my grandparents’ home in Orange.

That is a very long-winded explanation of how little my father had in common with our current president: Wharton and some exposure to Queens, though I can’t imagine the Jackson Heights neighborhood holding much interest back then for the young playboy developer. However, after my father died (playing chess at the Montclair YMCA) my brother and my husband went to the Northwestern Mutual offices in Newark to pick up his belongings. All his co-workers expressed sorrow, with many agreeing with the colleague who declared, “Charlie Keyser was one of the smartest people I ever knew.”

But I never heard my father say anything like that about himself. Out loud, for all the world to hear.

Oh, and he was a Republican, I’m sure. That’s another thing I’ve wondered about in the time of Trump. Would he still be? 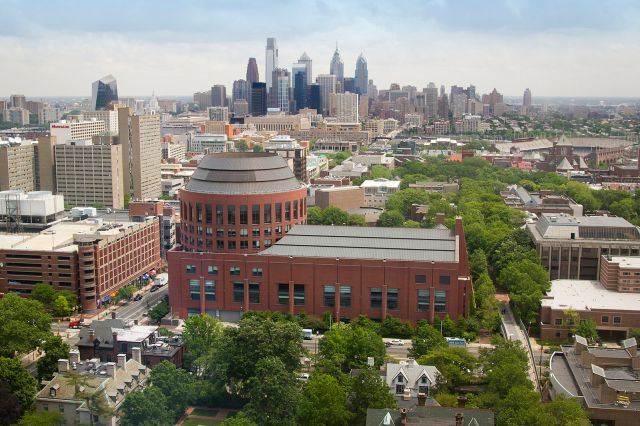