I’m writing to thank you for nominating Janet Yellen as chairman of the Federal Reserve. I was worried before when it looked like you would nominate that other guy. You may have seen my name on a petition or two about that. But you came through and so I will not have to relegate your cardboard effigy to the study closet. It will continue to stand by my desk as it has since December 2008 when my daughter sneaked into our house and set it up by the Christmas tree. After the holidays, we moved it down to the study. During the dopy “birther” business, Ed hung a copy of your official birth certificate around your neck.

Alison received the life-sized cardboard cutout as a gag gift at an office holiday party, one in which people are allowed to switch presents with other people if they wish. But everyone knew this gift was earmarked for Alison’s mother and off limits. I must admit there have been times during the past five years when I have considered moving it to the closet, but I figured an awful lot of the problems you were dealing with were not of your making. Honestly, I don’t know how you can remain so calm in the face of the nonsense. Perhaps, in the privacy of the residence or on vacation in Hawaii you are able to scream and curse and throw crockery about. I know I would.

But I remain, as I assume you do, hopeful. About a lot of things (health care reform, ending wars, a return to civility, etc.) but most of all right now an end to the Never-ending Great Recession. Yes, I know the experts say it ended some years ago. But if that’s so, why do we still have so many people unemployed and under-employed and why has the gap between the rich and poor become a chasm? And everyone’s in a bad mood. I hope that new leadership will help give the Fed a more pro-active role in developing policies to alleviate some of that. 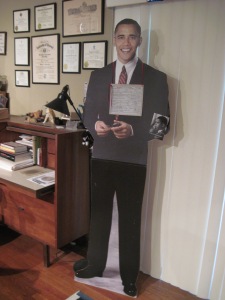 2 comments on “Thank you, Mr. President”