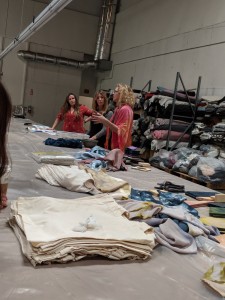 My daughter invited me to attend a fabric dyeing workshop at a clothing manufacturing facility in Los Angeles’s fashion industry. We were greeted by Jodie Dolan, president and founder of the Dolan Group, a company with several brands including Dolan, 34°N118°W and Guest Editor, clothing that sells at Anthropologie, Barney’s, Nordstrom, Saks Fifth Avenue, Shopbob and boutique retailers. The program was part of a monthly series of craft events Dolan launched to raise funds and awareness for a project the designer has undertaken to help make life a little easier for some in Los Angeles’s burgeoning homeless population.

While 58,000 is the official count of homeless persons in Los Angeles County,  it is believed the unofficial count is more like 120,000 owing to the many people sleeping in their cars who do not get counted in the annual homeless census. And with LA’s Skid Row and the Fashion District operating in fairly close proximity, it was just a matter of time before the two communities would interact. Dolan herself began volunteering at the Monday Night Mission where she learned about the nonprofit’s Shower of Hope, a mobile truck and shower trailer that makes stops in two Southern California locations and offers 30 to 40 showers on Saturday mornings.

The next logical idea for people involved with clothing was to provide a way for homeless people to clean their clothes. Thus was born The Laundry Truck LA, a 301(c)(3) nonprofit founded by Dolan to provide washer/dryer sets that will operate four hours a day three to five days a week, totaling up to 5,000 loads per year.

The dyeing workshop was part of a fund-raising effort to raise $150,000 for a laundry truck and a year’s operating expenses. Dolan Handmade, the monthly craft workshops, is part of that effort. The Dolan Group will also donate a portion of  sales from its direct-to-consumer website, shopdolan.com, as well as a portion of sales from Dolan clothing sold at retailers.

At the workshop I attended, electric crock pots filled with natural dyes in several different shades stood ready, along with blank silk scarves and tote bags and an assortment of items for creating patterns on the fabric. Mimi Haddon, named the Dolan Group’s artist-in-residence, was also on hand to provide direction to those of us learning the techniques for the first time. An MFA candidate in fiber art at California State University, Long Beach, Haddon teaches textile art and natural dyeing classes at the Craft & Folk Art Museum in Los Angeles.

When our fabric reached the desired depth of color, we each removed our pieces to sinks to rinse in cold water and then hung them outside to dry where their bright colors and fanciful designs waved in the air, providing a cheerful addition to a stark industrial parking lot. Great fun. I might just do it again. 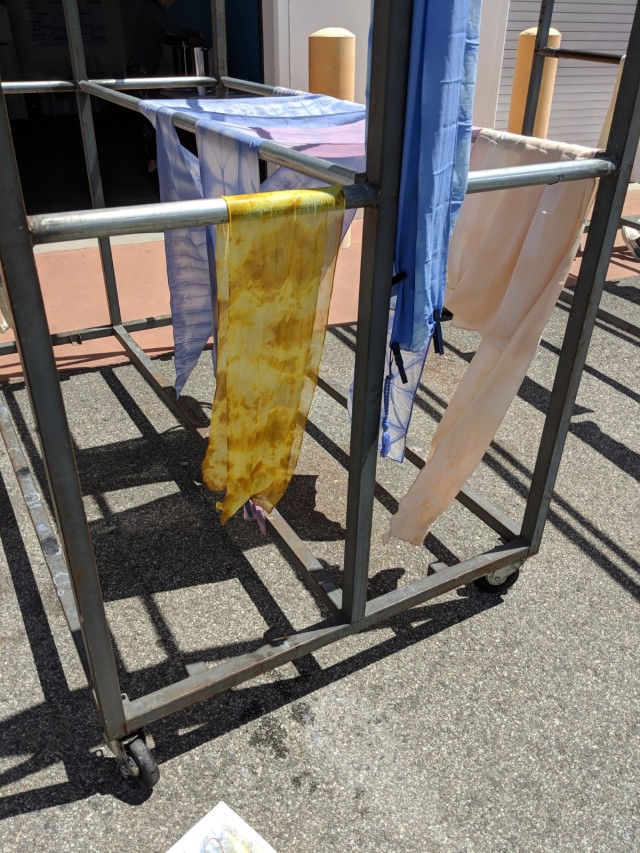