After losing two dogs within a year – one at the beginning and the other almost at the end – we went more than two years without a dog. Our little business became quite busy and there were trips related to it and to visits with our far-flung family. Besides, we discovered there is no optimum time to get a puppy. You just have to do it. And so we did. An eight-week-old female, our second brindle, came to live with us. While we were mulling over possible names – Germanic, never used before by us or any of Ed’s relatives living or dead – a friend who writes and teaches university courses in film studies hardly paused a second before exclaiming, “Lili Marlene!” Of course! Why had we not thought of that before? 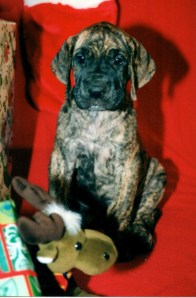 When we announced Lili’s addition to our household, a friend wrote asking if we’d been “on something” when we made that decision. No, but during the two years of her puppyhood we probably could have wished for it. I remember going on a five day trip and coming home to find five throw pillows destroyed. Having to leave shortly after for two more days, the toll was two more pillows. Oh, and she ate the headboard to our king-sized bed. Well, I exaggerate. Actually, she liked to lie on the bed up by the pillows and look out the window, her chin resting on the headboard while she gently gnawed away.

We took Lili for private obedience training lessons in a nearby park, and then once the trainer’s group classes got under way, to those also. Early on, the trainer said we were going to have problems with the dog. “She has a bit of an attitude,” the trainer said. We weren’t particularly concerned; after all, what’s wrong with attitude? The word brought to mind pouty starlets in Hollywood or self-absorbed artistic types. We were a little proud that our dog had “attitude.”

In an effort to socialize her, I began walking her all over town, into stores that would allow it and whose proprietors laughed when she stood with her front paws on the counter. Some places had dog biscuits for her. More and more townspeople were getting to know Lili. But she was getting very big and not always easy to control on the leash. And she began growling at dogs we passed by. Someone, perhaps the original trainer, had suggested a “prong collar,” a stainless steel device that looks much worse than it actually is. The prongs that encircle the dog’s neck are not pointed at the ends. Apparently give enough of a pinch to encourage the dog to behave. But I resisted until, driving past a woman walking a Great Dane, I pulled my car over to chat (a typical dopey Dane owner thing to do). “Oh, he has a prong collar,” I said. “Yes, I got it because I feared he’d pull me off my feet on the icy sidewalks. It works great.” The woman’s recommendation convinced me. I drove home, picked up Lili and walked her up over the hill and along the highway to a pet store. One of the clerks helped fit a collar to her, adding links as needed, and we walked back home. It was as if I were walking a different dog. Whoa! Why’d I ever resisted this? “Oh yes,” another dog trainer I encountered once said, “power steering for dogs.” But Lili still growled at other dogs. Where had that come from? I wondered. She was a female and had been spayed but this behavior seemed like some macho puberty rite. We hoped it would pass. 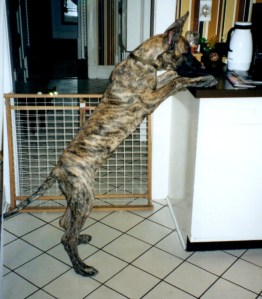 Instead, she bit our next door neighbor. Badly. Mary Beth had come into our yard to borrow a tool from Ed’s workshop. We were chatting by the back gate when Ed came home and let Lili out. She raced around the house with a crazed look in her eyes and headed right for Mary Beth who instinctively raised her arm to shield her face and neck. I screamed, “No!! Lili no!” The dog’s teeth sank into the upper arm which Mary Beth grabbed with her other hand. “I need an ambulance,” she said. I ran into the house screaming, “Ed, Ed. Lili bit Mary Beth. Take this towel to her. I’m calling 911.” In my panic, I first dialed 411. “Information,” said the voice. I got the number right on the second try. “My dog bit my neighbor,” I said. “It looks very bad.”  When I’d given the necessary information and the ambulance was on its way, I headed back outside. On the deck lay the dog, trembling and looking confused. “What happened?” she seemed to be saying. We were wondering the same thing. The dog knew our neighbor well, welcomed her and her children frequently into the yard to swim in the pool. There was no explanation for this.

While the paramedics performed triage, Mary Beth got one of her children to bring her purse and called a friend to come stay at her house while she went in the ambulance to the hospital. I followed soon after in my car and stayed with my friend for several hours until a doctor was available to stitch her up. “How about a plastic surgeon?” I asked. “Oh, I don’t know that it’s necessary,” she said. “Are you sure? Everything’s going to be paid by our insurance.” No, she thought. She just wanted to get it done and get home to her children.

The next day we were visited by the police and animal control. The dog pound could not accommodate our very large dog so she was put under “house arrest” for the required quarantine period. I kept looking at our beautiful dog and thinking, “Oh Lili, what have you done?” She was subdued. I decided to call the breeder we’d gotten her from.  When I related what happened, there was a long pause on the other end of the line. And then he told me they’d had problems with two other puppies in the litter. One female that they’d kept was so aggressive about her food that they had to feed her separately from their other dogs. A male that the owner wanted help in selling had been brought to the breeders for evaluation. The dog was so aggressive the breeders recommended euthanasia. They blamed that dog’s aggression on how he had been raised. But hearing from us was a blow because they knew of our long experience with Danes; it was hard to make excuses this time. Lili’s mother, whom we’d met, was sweet and gentle. But we hadn’t met the father, a champion dog that the breeder now told us was said to be hard to handle in the show ring.  I told the breeder I appreciated his honesty and that we planned to see if there was a physical reason, like a brain tumor, that caused this behavior.

I could understand the breeders’ efforts at making excuses. Hadn’t we done the same thing? Thinking it was cute when the trainers said Lili had “attitude.” Blaming the increased growling at other dogs and difficulty in controlling her on the leash on “puberty” and thinking a prong collar would solve everything. We even made light of an incident on the stairs when our visiting daughter waved a toy at the dog who responded with a menacing growl and a nip on the arm. “You startled her,” we said. “Here’s a Band-Aid.”

We learned about a veterinary clinic in South Jersey with an MRI machine and drove there one day. The vet we met examined her and suggested that prior to an MRI we consult an animal behaviorist. He gave us names at veterinary schools at Cornell University and the University of Pennsylvania. We made an appointment at Cornell and drove up with our dog, having already completed an exhaustive questionnaire ahead of time. Included were questions about Lili’s litter, the ratio of male to females (Lili and the dog with the food aggression were the only females, suggesting a preponderance of testosterone in utero).  We explained that the recent attack was as if the dog were being seized by something over which she had no control and which left her confused and dazed afterward. The behaviorist and her staff put Lili through a variety of tests and in the end, told us the dog was not a candidate for behavioral modification because her aggressive behavior was so erratic; there was no pattern that could be alleviated through training. “This is a very dangerous dog,” the vet said. “She should be euthanized; otherwise, she should never be outside without a muzzle.”  A written evaluation would follow. We drove home in silence, devastated by the news.

All this was happening during the summer we had six weddings to attend in different parts of the country. One of these trips was imminent. We’d already cancelled the older woman pet sitter who’d been planning to stay at our home. “Oh, Lili and I will be fine,” she’d said. “No, I’m sorry,” I told her. “It’s too much responsibility to put on you.” I started calling around to kennels and finally found one that understood our dog’s problem and would keep Lili separated from other dogs. Ed and I were sitting in our depressed haze. “Are we just postponing the inevitable?” I asked. Just then, the phone rang.  It was our nephew in New Mexico, a veterinarian and the father of the groom, inviting us to the dinner for out of town guests. We told him, what we had been dealing with. “Do you realize what trouble you’d be in,” he said, “having something in writing from an expert saying this is a dangerous dog, and she bites someone else?” It was like having cold water thrown in our faces. Of course we couldn’t take any more chances. We cancelled the kennel and called our old vet to schedule euthanasia.

By this time, Dr. Wilson had been joined in practice by his son and had modified his views on allowing the animal’s owners to be present if they wished.  Having heard my description of Bo’s peaceful passing, Ed agreed to come with me this time.  Again I sat on the floor with the dog and spoke to her while tears ran down my face and the younger Dr. Wilson administered the lethal dose.  After declaring Lili gone, he told us we could stay as long afterward as we wished. I would have stayed longer but Ed did not find the experience as helpful as I did. He was anxious to go home and do his grieving in private.

I sent an e-mail message to all our “Friends of Lili” saying, “Our big and beautiful, sweet and sassy, frequently goofy 153-pound lap dog Lili Marlene is gone, victim of genetic misfortune. On the advice of several experts and because of sporadic displays of aggression, we have had to have her euthanized. It was a hard decision to make, especially for an otherwise healthy two-and-one-half-year-old animal, the dog we intended would take us at least some of the way into our old age (Great Danes are not very long-lived but we certainly never expected to lose one at such a young age.) So shed a tear for her and with us, please, and thanks for being her friend.”

24 comments on “Great Dane in the Morning”