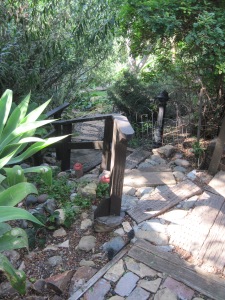 Here in California we’re having a drought, you may have heard. Been going on for four years but people are just now getting serious about it. The driving force is the Governor’s 25 percent reduction order for urban water use. But there is also the generous rebate program being offered by water districts.

In Los Angeles, the turf-removal rebate is $3.75 a square foot, one of the highest in the region according to the Los Angeles Times. So homeowners are ripping up their lawns and replacing grass with desert-type landscaping: rocks and stones and “drought-friendly” plantings. And some are even replacing their lawns with plastic. You know the situation’s truly out of hand when you see a plant nursery – a company in the business of live plants — advertising to install Astroturf in your yard.

In all, Bettina Boxall writes in the LA Times, “the Southland is expected to tear out the equivalent of more than 2,100 football fields of grass – or more than twice the turf removal goal Brown set for the entire state in his emergency drought order.”

On its website, Southern California Public Radio reports that demand for rebates has outstripped the existing funding but additional money is being sought and interested homeowners should continue to apply. Molly Peterson writes, “In one recent week, Southern Californians applied for $48 million in rebates for lawns.” She notes that so-called ‘cash for grass’ programs “have been around in some form since at least a couple of droughts ago, but the Metropolitan Water District calls this level of interest in its current program unprecedented.” 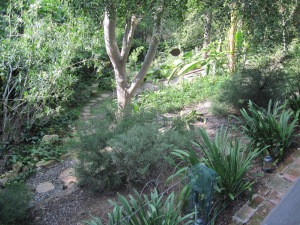 With our unerring bad timing, Ed and I already have converted our yard so no rebates for us. We replaced what little grass existed on our pretty-much vertical back yard with rocks and gravel paths, stepping stones surrounded by smaller stones and pebbles, wood steps and decking. Our reason for doing so, back when it rained in California, was to minimize muddy dog-paw prints inside the house.

We also planted a lot of native vegetation, cactus and succulents, mainly because the plants were offered to us free by people wanting more glamorous displays in their own gardens. Coming here from the East Coast, all of it was intriguing to us, and the fact that you could take a cutting from a neighbor, stick it in the ground, and before long have a real bona fide plant of your own was knock-your-socks-off amazing. That and seeing what used to be considered houseplants growing wild along the roadside.

Another dumb thing we did early, in the spirit of good citizenship, was to voluntarily cut back to two times a week running the sprinkler system, rather than the three times allowed by the city’s water department. So now we have to worry: Will our 25 percent reduction have to come from our already-reduced consumption? Or will we be penalized for trying to do the right thing?