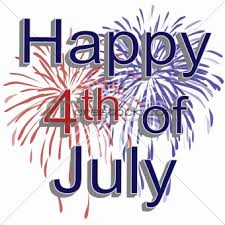 It’s July 4th and I’m feeling nostalgic for Independence Days past. Montclair, New Jersey did a fine job with the holiday, beginning with a parade of marching bands and representatives of various organizations in town. The parade was heralded every time first by the appearance of antique cars (“You know you’re getting old when the cars in the parade are identical to ones you went out in on dates,” I always said.) If you were lucky and knew a friend on the parade route, you could stand on their porch eating bagels and drinking Bloody Marys while watching the parade. Later in the evening there was a big fireworks display on the high school’s football field.

I’m sure there are wonderful parties here in Los Angeles this year, parties on boats, in fabulous homes on the beach, but we are babysitting two grand-dogs and one grand-cat. So lots of time for nostalgia.

Back in Montclair, the festivities presented a large gap of downtime in the afternoon – more than enough to sleep off the Bloody Marys – and then what? That is why Ed and I began hosting a party at our house. We provided hot dogs and hamburgers, along with cheap beer and wine, while the guests brought everything else. (“What do you need me to bring?” “Anything.” “But don’t you worry there’ll be nothing but potato salad?” “Never happens.”) 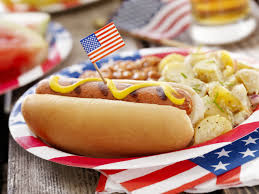 One year, after one such party, the guests all hurried off to the fireworks and we stayed behind cleaning up. As we walked back and forth through the screen door, an insect began buzzing against the screen and the cat batted at it from inside. On one of his trips through the door, Ed suddenly felt a sharp sting on his arm. “Ow!” he said. “That hurts.” In a short time he said, “You know, I feel strange.” “How strange?” I asked. “I don’t know, kind of light-headed.”

Being in a mellow mood after the day’s activities, I suggested we go to the hospital.” “That’s silly,” he said. “It’s just a sting.” “Oh, c’mon,” I persisted. “Let’s just go there.” As we drove, I asked him about symptoms, information I’d picked up from my own experience with yellow jackets. “Are you feeling warm? Short of breath? Is your throat closing?” When he answered yes, I began running red lights and screeched up near the hospital’s emergency entrance. But I’d parked too far back. “We’ll just have to walk the rest of the way,” I told him.  His walking became slower and slower. “C’mon,” I urged. “Can’t you go any faster?”

The security guard noticed and came with a wheelchair. “I’ll bring him,” he said. “You go ahead and sign him in.” While I was answering questions and filling out forms, the guard arrived with the wheelchair and Ed who promptly passed out. “Oh my God!” I screamed. “Do something!” The receptionist picked up the phone, the emergency room door flew open and a team of doctors and nurses whisked him away. I went back to the paperwork and then, as instructed, went to sit in the waiting room.

After what seemed a very long while, a doctor appeared and sat beside me. “Well,” he said, “we almost lost him but he’s going to be okay.” “You almost what??!” I said. “He got stung by a bug.” “Yes,” the doctor replied, “and it put him into anaphylactic shock. “His heart stopped and his pulse rate went to nearly zero.” Later Ed said he remembered hearing a voice say, “That’s it. This guy’s out of here.” But other voices urged him to “hang in there, you can make it.” We later learned that hearing is the last sense to go.

After an overnight stay in intensive care, Ed was released with prescriptions, including one for a kit of medications to carry in case of another attack, and shortly signed up for desensitizing allergy shots. And we both got educated about insect stings. Ed’s attacker was a white-faced hornet, also called a bald-faced hornet, a particular nasty variety, made all the nastier by the tormenting cat. While not the first insect sting of Ed’s life, we learned the venom’s intensity can build up in a body over time. We also learned that many deaths attributed to heart attacks could very possibly have resulted from insect stings. A person working alone in his garden, ignoring a sting, could die there without anyone knowing the real reason.

What I have never been able to reconcile in my mind is what kept me from saying to Ed that night,  “Oh, why don’t you just go lie down and see how you feel later?”