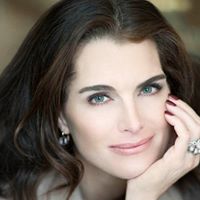 You know you’ve been around a long time when the Ivory Soap baby needs reading glasses.

In a commercial for Foster Grant eyewear, Brooke Shields notices her dining companion squinting at the menu and hands her glasses across the table. Then she also squints at her own menu and takes them back. Been there, done that.

The actress, and at one time wildly successful fashion model, was through the years repeatedly heralded among “the most beautiful women in the world.” Her first modeling job for Ivory soap came when she was 11 months old. Her most famous one was probably the “nothing comes between me and my Calvins” ads for Calvin Klein jeans when she was 15. (She’s also, I’m sure you know, a Princeton graduate, author, former wife of tennis star Andre Agassi and now apparently more happily married to writer/producer Chris Henchy and the mother of two daughters.)

So about reading glasses. I remember well telling the eye doctor that even with my reading glasses I was experiencing difficulty with printed words on paper, and the doctor, who was a friend, began by saying, “Well, Pat, when we get to a certain age…” I stopped him. “You’re going to say I need bifocals, aren’t you? Well, if that’s the case they’ll have to be the kind with no lines.” This was so long ago that I would be his first patient with the lineless – otherwise known as progressive – lenses so he was most interested in how well I would adapt to them. The answer was just fine, once I made a few trips up and down stairs.

(I’d already begun leaving my old glasses on longer for simplicity sake; at least you always knew where they were. Also, I noticed in business meetings how distracting it was when people continually put on and took off their glasses. “Hmm, now he’s going to put them on. And watch, now he’s going to take them off. Oops, there he goes again, putting them on. And what exactly did he just say? Who knows.”)

That same doctor friend offered me a way to try out bifocal contact lenses when they became available. The idea of sticking something in my eye had never appealed to me but I was intrigued. “How does that work?” I asked. “How do you get the bifocal part in the right place?” Very simple: The bifocal part of the lens is all around the perimeter so no matter how they’re inserted when you look down to read you’re looking through the correct part. Pretty ingenious on someone’s part. Anyway, this doctor would let me take as long as necessary to get used to contacts, working with his nurse/assistant until I was proficient at inserting and removing the lenses. I went for several sessions, and on the final one with my brand new kit all set up and ready for me to take home, we went through one more trial. Suddenly, a speck of eye makeup got in there with the lens, causing pain that I remember as excruciating. “Take it out, take it out!” I screamed. “Now, now,” she said in her calm nurse/assistant voice, “you know how to do it. You take it out.” It took some doing but I got the lens removed and said, “You know, I think I need more practice. I’ll come back.” But I never did.

And now I’m at the age where I’ll one day need cataract surgery, once the silly things are deemed “ready.” But for now, I can read restaurant menus just fine.