A friend sent a 1957 menu from Woolworth’s lunch counter showing costs of various food items like a “super de-luxe” ham sandwich on “plain bread, toast or hard roll” for 40 cents, topped off by a “king size” Coca Cola for 10 cents. It brought to mind my teen years in New Jersey and my first paying job, after babysitting, at Kresge’s 5 & 10 in Bloomfield Center. According to the U.S. Department of Labor, the federal minimum wage at that time was 75 cents an hour. But I remember being paid 35 cents to start and then 50 cents an hour so perhaps my rates reflected my part-time status.

I worked several different counters in the store but my absolute favorite was the lunch counter, taking orders and serving hamburgers, grilled cheese sandwiches, ice cream sodas and the like. If our shift covered a mealtime, we were entitled to fix ourselves something to eat. I was a very thin teenager – some may have said skinny – with a prodigious appetite. For my food break, I’d wait until there were no customers in sight and fill a big soup bowl with several scoops of different flavors of ice cream, top them with hot fudge, “wet walnuts” (the ones swimming in sticky syrup) and whipped cream. I’d put the bowl in the dumbwaiter, call “Taking my break” to a co-worker and race downstairs to meet my food in the basement. I’d then sit in the ladies room and devour it.

I remained skinny however, yearning for the curves that other girls had. For one period of time, I put myself on what I called a “gain weight diet,” having a milkshake and a banana every afternoon after school. “Your friends must have hated you,” one of my daughters said. I suppose they did.

Bond’s was a northern New Jersey chain of ice cream stores with a couple of traditions appealing to gluttonous teenagers. One was a Pig’s Dinner, featuring several scoops of ice cream slathered with various toppings and served in a dish designed to look like a trough. Anyone finishing the dish was memorialized with a listing on the wall and received a pin to wear reading “I was a pig at Bond’s.” I was certain I’d have no trouble polishing off the dish; I just had no interest in the appellation. 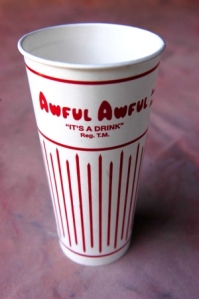 The other Bond’s tradition was an Awful Awful, so called because it was “awful big and awful good.” It was a milkshake made with five scoops of ice cream, served with a straw but so thick it really required a spoon. If you could get through four of them, the fifth one was free. A boy at school bet me I couldn’t pass that test and even offered to foot the bill if I wanted to try. I did, but I forgot on the night we’d arranged and ate dinner first – meat loaf, potatoes, vegetable as I recall – and there he was at the door to pick me up. Okay, I thought, I can do this. So off we went to Bond’s. I got through three Awful Awfuls before admitting defeat.

In the sorority house at college, it became common knowledge that I usually wore two half-slips in an effort to fill out the pencil-thin skirts that were the style. Once, someone put an ad in my mail cubby from Frederick’s of Hollywood for a padded girdle designed to give the wearer the appearance of a backside. “Pat, maybe you should try this,” the person had written on the clipping. Years later, at a sorority reunion, I reminded my aging sisters of the incident and offered an opportunity for the guilty party to “fess up, no hard feelings.” But no one stepped forward, and in fact, it appears I was the only one with memory of the incident.

Besides, by that time being too thin had long since stopped being a problem.