My cousin sent an article from The Guardian describing changes taking place in Newark, New Jersey’s largest city and the last place many people would expect to ever see gentrification. While a third of the city’s population lives below the poverty line, business is booming in downtown Newark and New Yorkers priced out of their city’s housing costs are eying the neighboring city 10 miles to the west. Xan Broooks, the article’s author, repeats a quote from former Newark Mayor Kenneth Gibson: “Wherever American cities are going, Newark will get there first.”

Dorothy grew up in Newark and my family’s home was in the nearby city of East Orange. (At college in the Midwest, my

hometown’s name drew snickers and comments like “East Orange. Is that anywhere near West Lemon? Yuk, yuk.” Of course, here in Southern California I get none of that since a great many place names pay homage to assorted varieties of citrus. New Jersey’s Oranges – Orange, East Orange, West Orange and South Orange – reflect this country’s original status as England’s colony and acknowledge such people as “William of …”).

Essex County (another nod to England) was a wonderful place for a childhood with parks and playgrounds, safe tree-lined streets with sidewalks, and excellent schools. My old elementary school, Franklin School, now The Whitney E. Houston Academy of Creative and Performing Arts, sat across the street from a branch library and a big expanse of green parkland with a brook running through. Not exactly the picture many people have when they think of New Jersey. Whitney Houston was one of many famous people who have called East Orange home – and many still do.

East Orange was a city and Newark was the bigger city close by where we dressed up to ride the bus for back-to-school shopping and lunch at Schrafft’s. Newark was where I went for ballet classes, riding the bus downtown by myself and walking over to my father’s office and then with him to the Margit Tarasoff School of Russian Ballet, where Mme. Tarasoff taught classes and where occasionally her husband Ivan appeared. Then bent and walking with a cane, he had been a star dancer in Russia. When he appeared in the studio to observe (and critique), we students were terrified. Mme.Tarasoff, born Margit Leeras I learned years later (thank you, internet), had been a ballet star in her native Norway.

As for the really big city of New York, that was where we went on special occasions, say to attend the Christmas Show at Radio City Music Hall and, maybe once, to see the Macy’s Thanksgiving Parade, or to eat at the Automat, that deliriously child-friendly restaurant with individual dishes of food behind glass doors that opened when the requisite numbers of coins were inserted and the handle turned. So much more fun than a cafeteria.

And these are just a few of the memories The Guardian article generated for me. I wish Newark well in its upward climb. But I hope it will be able to accomplish that without leaving its longtime residents behind in gentrification’s dust. 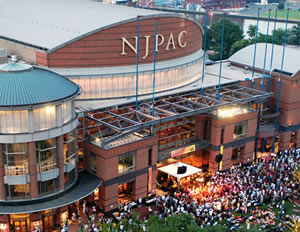