It’s the first of the month and as I turn the page on The Nature Conservancy’s wall calendar, I see them: three baboons. Just like the ones I did not see in South Africa. These guys, photographed in western Tanzania, appear to be working at opening some sort of shellfish from Lake Tanganyika, which the caption tells me is the world’s longest lake, holding “17 percent of our planet’s fresh water and (boasting) more than 300 fish species.” Lucky baboons.

At the Cape of Good Hope, which I visited with my cousin Dorothy, the warning signs were everywhere — “Baboons are Dangerous and Attracted by Food.” I’d seen similar signs atop Table Mountain towering 3,000 feet above Cape Town where we’d gone earlier in the week — traveling in a rotating gondola named The Flying Dutchman, me seated on a central perch, white-knuckled hands gripping a metal post and eyes tightly shut; I understand the view is magnificent.

Dorothy had told me of picnicking on the beach with her daughters when they lived in Cape Town and being watched by baboons hovering nearby. I was intrigued and wanted to see the animals myself. So everywhere we went in Table Mountain National Park, I kept hoping to catch a glimpse of a baboon and lamenting the fact that the closest I was coming to one was the ubiquitous signs. In the gift shop I even bought a refrigerator magnet that reads “Beware Baboons. Do Not Feed.” I guess I was being annoying, voicing my fear that I’d have to add baboons to my list of Animals I Never Saw in Africa because my cousin finally ducked into the gift shop and emerged with a small baboon figurine which she presented to me – “So you’ll finally shut up about baboons.” 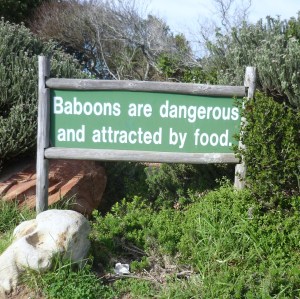 In the park flyer I read that baboons on the Cape Peninsula are protected, the only ones with that designation in all of Africa. You are warned to keep a safe distance from the animals, move away slowly if one approaches you, and hide your food. Feeding a baboon will get you fined. All of this information proved to be moot as I never did see one. And I thought I never had seen one anywhere ever until my daughter remembered that baboons had swarmed over our car as we drove through a wild animal park in New Jersey many years ago, defecating all over the car windshield. That memory removed any intrigue that might have existed before.

Dorothy confirmed that baboons are not very nice animals. But then this picture showed up in my e-mail. Go figure. 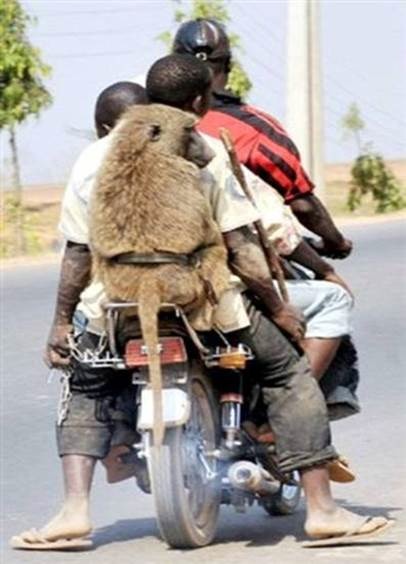