In the land of drought the morning after an unusually heavy rain calls for comment among the passing dog walkers. They also described their pets’ reactions to thunder claps and cracks of lightning, rare occurrences here in Southern California. “The dogs and even the cat freaked out,” one person said. “Our dog ran into a closet and hid in the farthest corner,” another said. At our house, our water-averse dog ignored the thunder and lightning but the sounds of heavy rain sent her back to bed.

“WEIRD WEATHER” read the headline in the Los Angeles Times’ Monday morning coverage of the weekend’s events “that brought beach closures, power outages and warm, muggy air to the parched region.” There were also flooded streets, downed trees and flows of mud and debris, as well as rained-out baseball games. A bridge washed out on Interstate 10, the paper reported, breaking apart and falling onto the roadway below. The result was complete closure in both directions of a key California-Arizona route heavily used by trucks and cars alike. Officials said that section of the interstate would be closed “completely and indefinitely.”

Rain in any amount in July is unusual, meteorologists said, noting that the weekend’s storm broke a number of records for the month. “To have that much rain yesterday and another significant storm today is pretty unusual…For July it’s historical,” said the National Weather Service’s Scott Sukup.

By Tuesday, when the projected continued rainfall failed to happen, the Times’ front page headline read “Hola, El Niño” as the paper reported scientists’ increasing conviction that the region’s strange weather indicates the arrival of El Niño conditions and with that, predictions for a wet winter. Will that mean an end to the four-year drought? Or will it bring further problems? “Great droughts usually end in great floods,” according to Bill Patzert, climatologist for NASA’s Jet Propulsion Laboratory. So flood control officials are planning for the worst, the paper said.

El Niño occurs when the ocean along the equator warms, triggering “changes in the atmosphere that can dramatically alter weather patterns across the world,” the paper said. The last very strong El Niño was in 1997-98 when a series of storms left 17 dead and more than half a billion dollars in damage. “Rivers and flood control channels flooded neighborhoods, homes slid off soggy hillsides and winds blew off roofs,” according to the Times.

NOAA, the National Oceanic and Atmospheric Administration, has an easily understood explanation of El Niño, which is Spanish for The Little Boy. Because the weather pattern tends to begin developing in December, around Christmas time, South American fishermen coined the term that refers to the Christ Child.

There’s also an opposite weather condition called La Niña, the Little Girl, that represents a cold phase. That’s a rarer phenomenon, but if it ever occurs I guess we’ll be greeting one another with “Feels like Antarctica.” 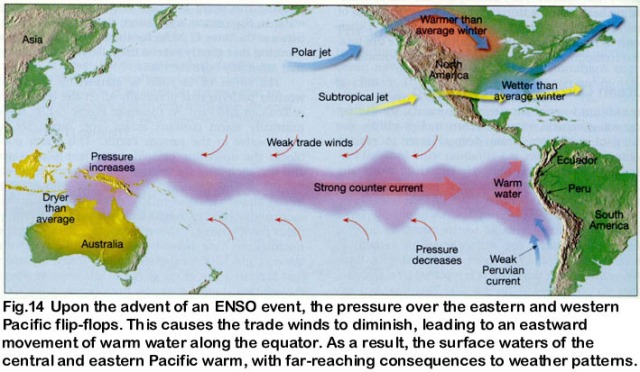